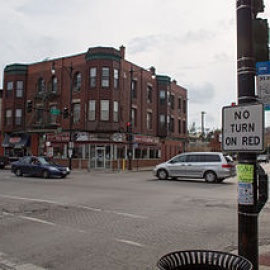 Hotels & Things to Do in Bridgeport

Cork & Kerry At The Park

The prototypical urban immigrant community, Bridgeport is to Chicago Illinois what Staten Island is to New York, and a huge source of cultural diversity for the Area. This tiny working-class Chicago suburb is home to some 35,000 hard working people, most of whom are either second or third generation Americans. The town's population is composed primarily of a much storied population of Irish and perhaps inexplicably Lithuanian descent. In fact, Bridgeport is home to Lithuanica Avenue, a street which some 60% of Chicago's Lithuanian population calls home. Perhaps a perfect microcosm of Chicago, Illinois Bridgeport is also home to equal parts people of Asian and Hispanic descent, who comprise more than 505 of its total population. Though Bridgeport Illinois is a small suburb, being bordered on the North and West by the Chicago River, on the south by Pershing Road, and on the east by Canal Street it has several K-12 schools to service the children. Mark Sheridan Academy, Philip D. Armour School, Robert Healy School, Charles N. Holden School, and George B. McClellan School are Bridgeport's main educational institutions, as well as several small private and specialty schools in the area. Shopping and distractions are fairly non-existent in Bridgeport, since the area is almost entirely residentially zoned. However, as any resident of this colorful community will tell you, roadside carts and outdoor eating establishments are prevalent in some areas, and the scent of a wide variety of cultural foods fills the air on many of Bridgeport, Illinois' public thoroughfares.