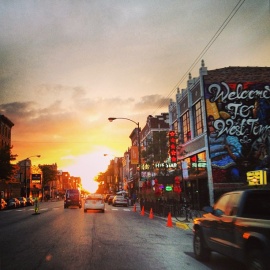 Hotels & Things to Do in West Town

Chicago's West Town neighborhood is located on the city's northwest side. Its diverse population accounts for the presence of many authentic ethnic restaurants and shops. At the beginning the twentieth century, Germans, Poles, Italians and Scandinavians immigrated to West Town. By the middle of the century, the population shifted, and the neighborhood enjoyed an influx of Latinos. This gave rise to some of the best Mexican restaurants in Chicago. La Contessa on North Ashland Avenue is known for it brocheta de camaron, a dish favored by its regular customers. Another favorite restaurant, the Abode Grill, serves authentic Mexican dishes such as Camarones en Cazuela, a shrimp dish with considerable kick. Recently, the neighborhood has been gentrified somewhat as it's become popular with an affluent artist, bohemian and student crowd who enjoy the new organic restaurants in the area. The Flatiron Arts Building is laden with art galleries. The top floor is a mecca for artists who have their studios in the building. With these newest residents came an incursion of fusion restaurants, chic nightclubs and up-end shopping. Although the neighborhood has undergone some changes, one of the most popular spots is still the Division Street Russian and Turkish Bath, an old-style public bath house where neighbors come to for a steam and a bit of gossip.

For just one Christmas dinner you should be able to get out of cleaning duties and escape any family drama. If you feel you deserve a break from cleaning or family, visit one of the...

Christmas in Chicago has arrived and that means holiday events in the windy city! From ugly sweater bar crawls to Santa runs, there are several

Thanksgiving is a time to be with family and celebrate tradition. These Thanksgiving events in Chicago are the perfect chance to drink and eat with the people you're thankful

With Thanksgiving this month and Christmas right around the corner, your weekend can fly by just planning for the holidays. If you want to make the most out of your weekend, this guide has all the

Many families who donât have a head chef or talented cook on their team, often choose to eat out on Thanksgiving. And if youâre a part of one of those families, heck, we donât blame you!...

Bars With Live Music in Chicago

Chicago is known for its brutal winds, delicious food, beautiful skyline, the winning sports teams, and especially its music. With so many musicians coming from Chicago the live music scene is next to none...

The long weekend is finally here, so how do you plan on spending it? My ideal Labor Day weekend is always spent at a cookout, a pool party or a festival with friends and family. Luckily, Chicago has...

Thrillseekers and ballers looking for a good time in Chicago can feel like a VIP at these top bars with bottle specials, perfect for anyone looking to have a memorable night in the windy city. From...

Yoga is a 5000-year-old practice perfect for anyone looking to increase their strength, flexibility, and most importantly patience. For me, I need to learn patience more than anything but everyone can...

Hungry for some feel-good smoothies or healthy meal alternatives? Look no further with our 312Area Guide for the best smoothies in Chicago! From healthy restauran

20 of the Juiciest Burger Joints in Chicago

Everybody loves a mouthwatering cheeseburger (except for vegans) and lucky for us the American staple can be found at most eateries, fast diners, and sports bars in Chicago

When you think of Chicago, you think baseball, pizza, the cold, and hot dogs. Being such a historic food in Chicago for so long, hot dogs have earned their place as residents' favorite culinary experience....

If you're looking for some fun nightlife and things to do in Chicago check out these cool retro gaming bars perfect for anyone who loves to drink and game. An arca

Tourist attractions in Chicago are everywhere but which of them do you need to see or try? If you're only in town for a short period of time this is a question you shoul

Chicago is the birthplace of house music and its roots in the music scene go way beyond that. The Windy City has always been a hub for nightclu

Restaurants Open on Christmas Eve and Christmas Day in Chicago

Chicago may be known for the bulls, but the city also has plenty of outstanding restaurants to choose from, too! However, finding a restaurant that's open on a holiday can be a little challengin