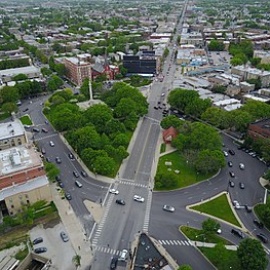 Hotels & Things to Do in Logan Square

A short jaunt northwest of glamorous Michigan Avenue, you'll find Logan Square, the epitome of a Chicago, Illinois neighborhood. Rich with history, great little shops and restaurants, it is one of Chicago's most popular areas. From cool and kitschy clubs, featuring some of Chicago's finest music and urban entertainment, to annual events like the Milwaukee Avenue Arts Festival and the Logan Square Historic District House and Garden Walk, you will find the real Chicago waiting to welcome you on its northwest side. Logan Square is bordered on the west by the Metra/Milwaukee District North Line railroad and on the east by Chicago River's North Branch. North and south boundaries are Diversey and Armitage, respectively. With Chicago Transit Authority's Blue Line train running from Logan Square to both O'Hare airport and downtown Chicago, the neighborhood is popular with young professionals. The real estate boom of the early 2000s brought quite a bit of rehabilitation to older homes and buildings, many being converted to condominiums. The area is culturally diverse and noted for its stately graystone apartment buildings and classic midwest bungalows. More amazing architecture can be found in the areas many churches. At the intersection of Kedzie and Logan Boulevards and Milwaukee Avenue is a beautiful circular green space marked in the center by the Illinois Centennial Monument, which was designed by the Lincoln Memorial's architect, Henry Bacon. When tourists think of Chicago, they imagine tall buildings and bright lights. When Chicagoans think of Chicago, they see neighborhoods like Logan Square.

For just one Christmas dinner you should be able to get out of cleaning duties and escape any family drama. If you feel you deserve a break from cleaning or family, visit one of the...

Thanksgiving is a time to be with family and celebrate tradition. These Thanksgiving events in Chicago are the perfect chance to drink and eat with the people you're thankful

With Thanksgiving this month and Christmas right around the corner, your weekend can fly by just planning for the holidays. If you want to make the most out of your weekend, this guide has all the

After spending the day with your family on Thanksgiving, you might need to head to the bar for a drink. We all know that getting together with family is fun, but sometimes it can also be stressful. Every...

Bars With Live Music in Chicago

Chicago is known for its brutal winds, delicious food, beautiful skyline, the winning sports teams, and especially its music. With so many musicians coming from Chicago the live music scene is next to none...

Yoga is a 5000-year-old practice perfect for anyone looking to increase their strength, flexibility, and most importantly patience. For me, I need to learn patience more than anything but everyone can...

Fitness Centers and Gyms in Chicago

Looking to get shredded? Or if you're like me, do you just want to lose a couple of pounds? These gyms and fitness centers in Chicago are perfect for just that a

Hungry for some feel-good smoothies or healthy meal alternatives? Look no further with our 312Area Guide for the best smoothies in Chicago! From healthy restauran

20 of the Juiciest Burger Joints in Chicago

Everybody loves a mouthwatering cheeseburger (except for vegans) and lucky for us the American staple can be found at most eateries, fast diners, and sports bars in Chicago

Challenge Your Brain at the Best Escape Rooms in Chicago

Finding fun, indoor recreation in Chicago can be a challenging task being such a large city, but it shouldn't be! The activity itself should be the c

When you think of Chicago, you think baseball, pizza, the cold, and hot dogs. Being such a historic food in Chicago for so long, hot dogs have earned their place as residents' favorite culinary experience....

Billiards in Chicago is one of the best indoor games you can play at any time of the year. Whether it be the blistering winter of the windy city or the heat of the

If you're looking for some fun nightlife and things to do in Chicago check out these cool retro gaming bars perfect for anyone who loves to drink and game. An arca

Out of towners and locals can both share the festival experience in Chicago together. Being a hub for cool events and amazing festivals, Chicago is at the top of the festival game for all types of recreation. From...

Best Hotels in Chicago for Tourists

Coming from out of town and need a place to stay? From 40 story luxury hotels to cute bed and breakfasts, Chicago hotels are a dime a dozen and can fit any travele

Coming from out of town or just like trying new food in Chicago? Either way, you'll want to visit these must-try restaurants in Chicago to have a new flavor experience.

Chicago is the birthplace of house music and its roots in the music scene go way beyond that. The Windy City has always been a hub for nightclu

Brian O'Neill on Those Movers LLC
Review 5 days ago